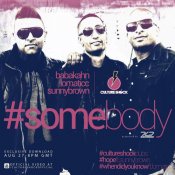 “We’ve had the opportunity to work with Britney Spears, Lady Gaga, and Nicole Scherzinger so giving the desi twist to a big mainstream track is our forte we could say. This fusion track is the perfect lead into our new single Raise Your Hands a grimy club banger with a Punjabi/English twist” Sunny Brown

For more information and more new music check out their official Facebook page.